The John Lawson Chapter, was chartered in 1995. Our namesake, John Lawson, was born in London in 1674 and died in 1711. From 1700 to 1701, he explored and surveyed North Carolina and South Carolina. This first exploration ended in Bath, North Carolina. He returned to the Carolinas in 1710 to explore the source of the Neuse River as well as plan and settle the town of New Bern. Unfortunately, the relationship with the Tuscarora Indians deteriorated and Lawson was put to death. He is noted for his book “A New Voyage to Carolina.”

The John Lawson Chapter members are active in their support of veterans, Colonial Heritage Month, and Pocahontas Projects among other activities. Members of the chapter have been state officers and chairmen. Currently the State President, State Heraldry and Coats of Arms Chairman, and State Resolutions Chairman are members of our chapter. 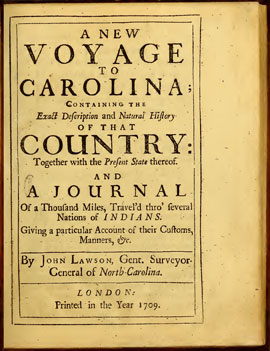 John Lawson’s Journal of his explorations in the Carolinas. Printed in 1709.