Our chapter is named in honor of Sir Humphrey Gilbert. He was born in Devon, England and was the elder half-brother of Sir Walter Raleigh. In 1578, Sir Humphrey Gilbert was authorized to establish an English colony in North America. His expedition achieved that goal when it arrived in Newfoundland in 1583. Unfortunately he drowned on the return trip to England when his ship sank off the Azores. This, however, marked the beginning of the ventures of the Gilbert-Raleigh families, which eventually culminated in the successful establishment of an English colony at Jamestowne in 1607.

Our chapter received a charter in August, 1997, in the home of our Organizing President Elizabeth Deane Haw Hobbs. We hold four business meetings each year, two in a Colonial Tea format and two which include luncheon. Our programs consistently earn recognition at the state level. We appreciate the diverse and distinguished presenters we are fortunate to have at our gatherings. In addition, we offer lineage workshops for prospective members and occasional sessions on topics such as Heraldry and Coats of Arms supplemental applications.

Our Sir Humphrey Gilbert Dames take pride in the donations we are able to make toward the Society’s scholarship and preservation programs, both at the state and National level. 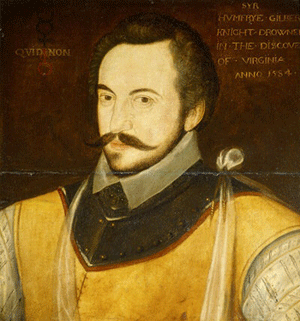