The Governor John Archdale Chapter seeks to bring recognition for Colonial Dames in the Charlotte metropolitan area while providing interesting events for the chapter members. For the last three years, the chapter has had a display at the South County Regional Library and has presented the Colonial Dames wreath at many other patriotic society markings. In 2015, to celebrate the 100th anniversary of the founding of Colonial Dames, the chapter presented a marker for the Sardis Presbyterian Church Slave and Native American Cemetery. This was the first time the chapter had placed a historic marker in Mecklenburg County.

In 2015, the chapter had two monthly meetings at Myers Park Country Club. The spring meeting was a field trip to a 1780 log home restoration on Long Creek. This 250-year-old log cabin was the typical early antebellum Mecklenburg County log cabin. The annual potluck lunch for Colonial Heritage Month was held at a member’s home. A 100th anniversary birthday cake and Colonial Dames favors were gifts from a member who had attended the National Society Conference in Washington. Another member who is a skilled fiber artist, gave a spinning demonstration and spoke of the history of spinning in Colonial times. The chapter’s vice presidents designed and produced a lovely chapter directory. One member received a certificate honoring her 50 years of Colonial Dames membership. It has been a busy and productive year for the chapter. 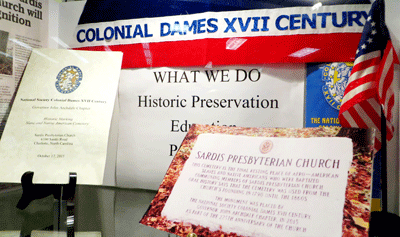